From the first brushstroke to the publication of the finished illustration, Pol Montserrat works following an intentionally experimental process and with each order allows him to shape fluid images and familiar silhouettes using India ink or gouache. From his studio in Barcelona this artist, whose work has given life to several editions of Mobles 114 catalogs, illustrates ordinary scenes in a minimalist and beautiful fashion.

Drawing and painting being his vocation from an early age, Pol has found in illustration a channel with which to express emotions, situations and values through a unique language. After training as a graphic designer, in 2015 Pol decided to earn a living out of his hobby and focused his career on illustration working for brands and local projects. Three years later, in 2018 and on the occasion of the release of a new catalog, Pol Montserrat and Mobles 114 started a relationship that extends to the present day.

From that first collaboration, a link was born that resulted in a series of illustrations for the Classics catalog. In them, the Catalana armchair, the Jujol table, the Fil lamp or the Copenhagen ashtray are filled with color thanks to the fluid and conceptual strokes of the artist; diluted and close images that invite the viewer to feel an immediate connection.

Between abstract and figurative expression, these illustrations by Pol for Mobles 114 are the window to a lived and relaxed space, with a timeless and Mediterranean character where everything remains unchanged.

The latest collaboration between Pol and Mobles 114 was an animation for the video opening of the PEY table collection. In it, Pol turns a neutral scene into a cozy home with his characteristic brushstrokes. The illustrator also intervenes in the video exemplifying some of the functionalities of the set of tables for workspaces or home offices.

Just a few quick strokes allow Pol Montserrat to bring us closer in a dreamlike way to the honesty and simplicity that Mobles 114 also seeks in all its designs.

More than just a restaurant serving delicious, traditional catalan food, the “Nou” Mas Vell is a place that exudes creativity and where things happen all the time. Serving also as a brewery, pub, coworking space and a place to host events, the people behind the project are positive that this is also a lifestyle. And not only do they brew their own beers here, but this practice also extends to ideas and creative energy.

Located in the Masnou area near Barcelona, in a former farmhouse from the 14th century overlooking the sea, this building was later integrated by modernist architect Bonaventura Bassegoda into the Casino complex during the very first years of the 20th century. The building was then restored, preserving its impressive doorway and some other iconic features in Gothic style that meld with a certain Mediterranean flair due to the proximity to the coastline. 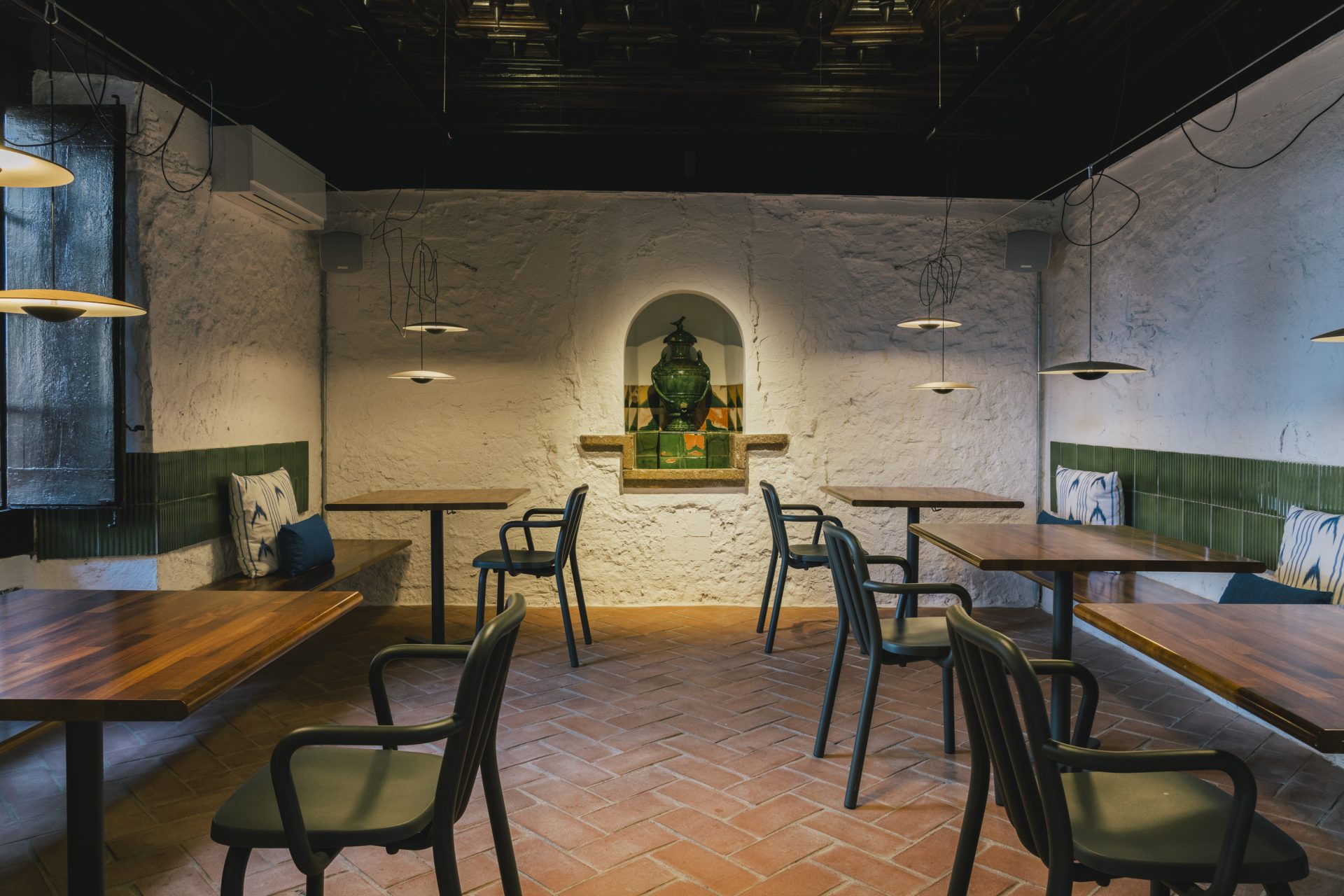 The current project of architect Stefano Colli for “Nou” Mas Vell incorporates pieces by Mobles 114 in both the interior and the patio. The Tube chair and table designed by Eugeni Quitllet has a distinctive style, reminiscent of Barcelona’s industrial past, which works wonders in the outdoor dining area; while the metal of the Nuta stool and the Oxi bistrot table echoes the surfaces of the adjacent beer brewing tanks inside the restaurant. Colli has also incorporated the collection made up of the Gràcia Wood chairs and table in the coworking areas.

The graphic identity of this new Mas Vell was developed by Ingrid Picanyol Studio in parallel with Stefano Colli’s project; as a result, they compliment each other. These interventions were understood as a homage to the iconic legacy of El Mas Vell by respecting the original architectural setting, rescuing elements from the past and by adding some others that may have been present back in the days.